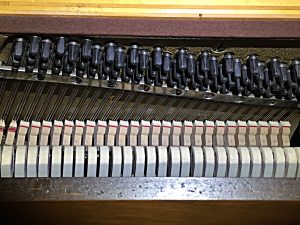 Piano tuning – the first time in many years!

By Douglas Lee on douglasleemusic.com

This piano was from my mom and dad and the last time it was tuned was many years ago!  Its been in our house for probably over 20 years and I never had it tuned since it didn’t seem necessary!  No else was going to hear it!

But if I’m going to record piano music, the first step is to tune the piano because there are several strange twangs, thuds, and screeches that will make you cringe!

I’m not going to blog about how to tune the piano (you can learn all about piano tuning from the internet) but will just share some of my experiences from my 1st attempt at piano tuning. 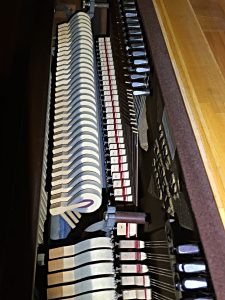 These days, who do you turn to first?  The internet!  Sure I could hire a piano tuner for $150, but what a better way to get to know the piano, than to learn to tune it your self. You can buy a decent piano tuning kit for $30, complete with instructions.  So why not try?  I used my sisters Christmas Amazon gift certificate to pay for most of it. Thanks Deb!

I forgot that the top lid of the spinet piano actually opens up since it is hinged!  Whoa!  Lots of dust!   Unlike a grand piano with its horizontal big harp, the spinet piano (a low upright) basically looks like two vertical harps, each with a row of diagonal strings.

Other blog posts and music forums said there could be broken strings or things resting against the strings. But how am I going to reach down below into this massive instrument to find what’s causing all the strange and awful noises?

“…several paper clips resting against the strings at the bottom of the harp!  They were causing those awful twangy sounds on some piano notes!”

Again, the internet is a valuable resource. I discovered that the front lower panel below the keyboard easily pulls forward and off, revealing a ton of dust, cobwebs, small pieces of paper, and other miscellaneous things. Disappointed, no historical coins or dollar bills.  Time for the vacuum cleaner!

To my surprise, there were several paper clips resting against the strings at the bottom of the harp! They were causing those awful twangy sounds on some piano notes!  Apparently no broken strings!  So thankful!

Now onto tuning…..there are 88 piano notes.  And most of them have 3 strings!  Thats a lot of strings.  Some notes towards the bass end have 2 strings and the lowest notes have only 1 string.  Manually tuning this instrument is going to take some time.

And it did.  And it was not easy. That’s where hiring a professional piano tuner can save you a lot of time.  Most notes were about 1/4 pitch flat, not too bad for not being tuned for many years.

And instead of a traditional tuning fork, these days everything is now electronic. There are small pocket devices that can check the tune of instruments. And someone in a music forum recommended using an iPhone tuning app!  There are several available.  I chose one that has a large, easy-to-read scale with a meter didn’t bounce around so much.

I could only tune 1 octave per day before leaving for work.  It takes a lot of time.  With 3 strings per most of the notes, you tune 1 string with the meter, then move the damper wedges around and then tune the other strings to the 1st string by ear until they sound like just one note.

Tuning the piano resulted in a sore back because I had to lean forward to reach into the piano to place the dampers wedges and rotate the pins with the tuning hammer (lever tool).  At an octave at a time, it took over a week to tune all 88 notes.

This old piano has a nice tone (that may be subjective, since its the piano I grew up with) and it sounds so much better after it was tuned!  The piano has lots of natural reverb sound due to its wooden structure, and from I’ve read, from the adjacent strings too.  In the recordings, it sounds like the piano is in a concert hall!  Its actually in a carpeted living room.

A few weeks later, some notes started to sound flat again. Sure enough, some strings had tightened slightly. I’m not surprised since this is the 1st time in many years.  Another week of a sore back.  Its just like practice which is needed to get better!